Our newsletter is only available in English. If you need to translate it, please use Google Translate

We can’t quite believe that we are nearly halfway through the year, but we live in unusual times (as we all know) and all of us are constantly waiting for news updates on a global basis.

However, we are happy to report that development of VueScan continues as always, and this month we thought you might like to see where all the ‘VueScan action’ takes place and how we develop, build and test VueScan. See below for a picture of the office of Ed Hamrick – one of the developers of VueScan. We’ve said many times that we are a small company and now you can see this for yourself! Our other developer is David Hamrick – Ed’s son – who has a tidier office.

Please continue to email us with your comments, product suggestions and user stories. Not only are they vital to us in planning product updates, but learning about your scanning projects is fascinating and we want to thank you for sharing them with us. We appreciate the time you take to contact us and one of us will reply to every email we receive.

Please remember you can contact us for technical support (we need a Problem Report) and any general enquiries, suggestions or feedback here

Wherever are you in world, please continue to take care and be safe.

A day in the life of Ed Hamrick – Developer of VueScan

Albert Einstein once said “If a cluttered desk is a sign of a cluttered mind, of what, then, is an empty desk a sign?”. Steve Jobs, Samuel Johnson, Mark Twain and Thomas Edison also had famously cluttered desks.

Like my son David, I have many interests and projects, but for both of us, VueScan is our main project. Besides VueScan, I also work on developing technologies and patents for biotechnology and have been granted dozens of patents in many countries. My latest projects are extracting arabinogalactan from larch wood chips and growing protein for animal feed on straw. It’s been a fun project and allowed me to travel to many countries over the years.

All this does result in a cluttered desk. Here’s a recent picture of my desk, while I was working with a half-dozen Genesys Logic scanners for VueScan 9.7.57: 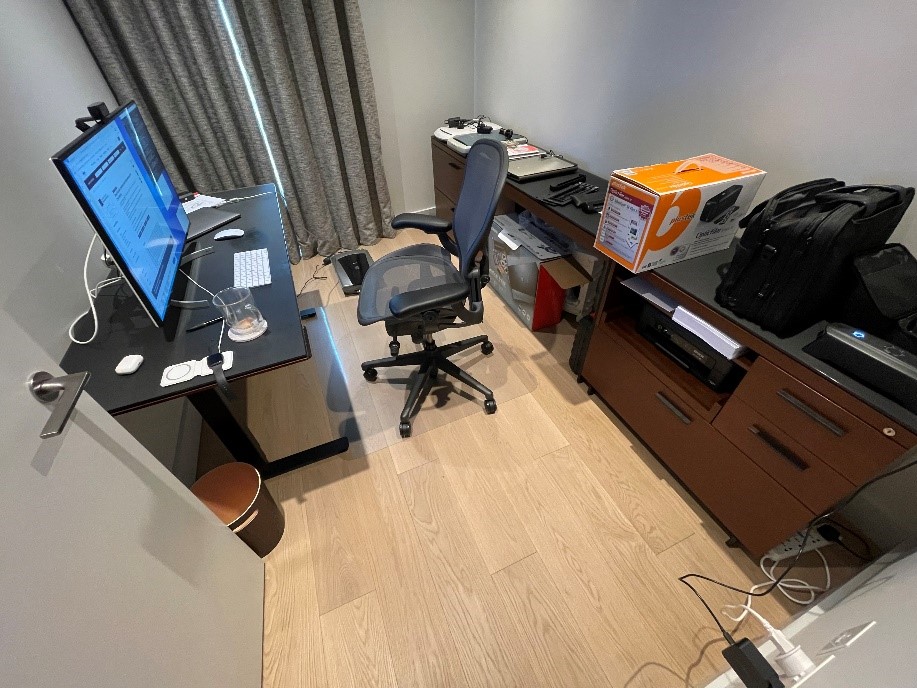 I only use two computers to develop, build and test VueScan – an Intel MacBook Pro and a Raspberry Pi 4 (that I built myself), all using a single 32 inch LG 4K monitor, an Apple Magic keyboard and an Apple Magic mouse. I have a 1 Gbit/s fiber optic Ethernet connection to the internet (which is new for me – David has had this for years – I love it). I use a BDi motorized stand-up desk and a Herman Miller Aeron chair, with another BDi desk for lots of extra workspace.

The MacBook Pro runs Parallels with three virtual machines – Windows 10, Ubuntu Linux x32 and Ubuntu Linux x64. I build the Linux ARM versions on the Raspberry Pi. This means I can re-release VueScan from everything I carry in my briefcase (on the right in this picture). I’ve even re-released VueScan (all 19 builds) a few times from an airport lounge – it’s that easy.

You might think this is unimaginably complex, but it only takes me 10 minutes to build and release a new version of these 19 builds. If you’re a programmer, you can guess how – makefiles :) The other thing that helps is that I build everything from one source code base – because I use wxWidgets for the user interface.

Fixing problems is what takes most of my time in development. I often have to fix problems with scanners that I don’t have, so I can only do this when customers are willing to run test versions with their scanners and email me the resulting vuescan.log file. Other times (albeit rarely) I just need to buy a used scanner on ebay, since I sometimes need to see (and hear) how a scanner reacts to different commands. One reason VueScan supports so many scanners and is relatively problem free is that our customers are incredibly helpful with running test versions for me – thanks!!

How do I prioritize what I work on with VueScan? If it’s easy, it gets done first :) New scanners that are quite similar to existing supported scanners are at the top of the list, and problems or improvements that affect lots of customers are next on the list. Otherwise, the squeaky wheel gets the grease – if multiple people report a problem or ask for a new feature, it moves up the priority list.

I send out a few test versions of VueScan every day to test fixes to problems that people report. It’s only a 10 minute process to make a test version, so I do it often. When people run the test version quickly, I can sometimes send someone 10 or 15 test versions in a day until the problem is solved.

I enjoy the development process, and enjoy solving problems with VueScan.

Why so much work on Genesys Logic scanners?

A company in Taiwan, Genesys Logic, has made the most powerful scanner chips for the past 15 years. The Plustek OpticFilm scanners all use Genesys Logic chips, as do most of the Canon LiDE flatbed scanners. Some high-end flatbed/film scanners that use the Genesys Logic chips are the Canon 4400F, 5600F, 8400F and 8600F and HP Scanjet 4850, 4890, G4010 and G4050. All of these scanners can often be purchased for almost nothing on eBay, since Plustek, Canon and HP often don’t support these scanners on new operating systems.

We worked hard for the past year on improving support for these scanners, and now they all work better than they did when they were first sold. For instance, the Plustek OpticFilm 8200i is now more than twice as fast as the software originally bundled with the scanner and is amazingly quiet when operating.

These are some of the best scanners ever made, and we can recommend you buy them on eBay.

We know that many of you use (and love) Nikon scanners, so we thought this may be of interest to you.

Q) When will you add Digital ICE to Vuescan?

A) Many people say that VueScan’s “Filter | Infrared clean” option is better than Digital ICE, and we’ve had this option for almost 20 years.

Q) I bought VueScan 15 years ago and you’ve kindly sent me a new serial number many times since then. I’ve lost my serial number again – could you manually search for this and send it to me?

A) We are no longer able to retrieve licenses older than a year. But licenses should still be accessible via the email we sent to you after purchasing.

Q) I’m trying to move the copy of VueScan Standard Edition that I bought years ago to a new computer. Could you send me instructions describing how to do this?

This is from Steve from Galesburg, IL. After the last newsletter Steve very kindly sent this to us – all about his family background with some wonderful photos. Thank you very much Steve, we really appreciate it.

If you have a project you are working on please send it through to us!

I want to second Gerrie’s note of thanks (users’ comments in the last Newsletter): without VueScan I would have had to abandon my (very expensive) Nikon Coolscan 5000 long ago. The Nikon scanner sounds like a steam locomotive in a dark tunnel every time I fire it up, but thanks to VueScan, it still works just fine.  So, again, thank you!

Some time ago I wrote a note of thanks about the countless 35 mm slides I took as a student in Greece (1969-70) and was only able to scan because of your software. Most of these were pretty detailed and probably of little interest to you or your clients (I used them for teaching where details mattered), but more recently I’ve been working on another project that might have some greater appeal.

I was born in Hawaii in Jan. 1942 where my father was serving as an army doctor. Shortly after I was born, my Mom and I were sent back to the States, while my Dad remained in the islands for the duration - and he took lots of pix!  Attached are a few of his photos from a family album I’m working on.  The b/w images were scanned on a flatbed scanner, but the color images were all from 35 mm slides scanned on the Nikon scanner – which would not have been possible without the VueScan software. Note in particular my Dad in camouflage. I include the b/w images just to give you a feeling for the album, but it is the color images I wanted you to see - and to thank you for them.

There are many more color slides to be scanned for the upcoming, revised version of the album, and once again I will rely on your software to do the work.  Perhaps you can imagine what this means to me and my family. 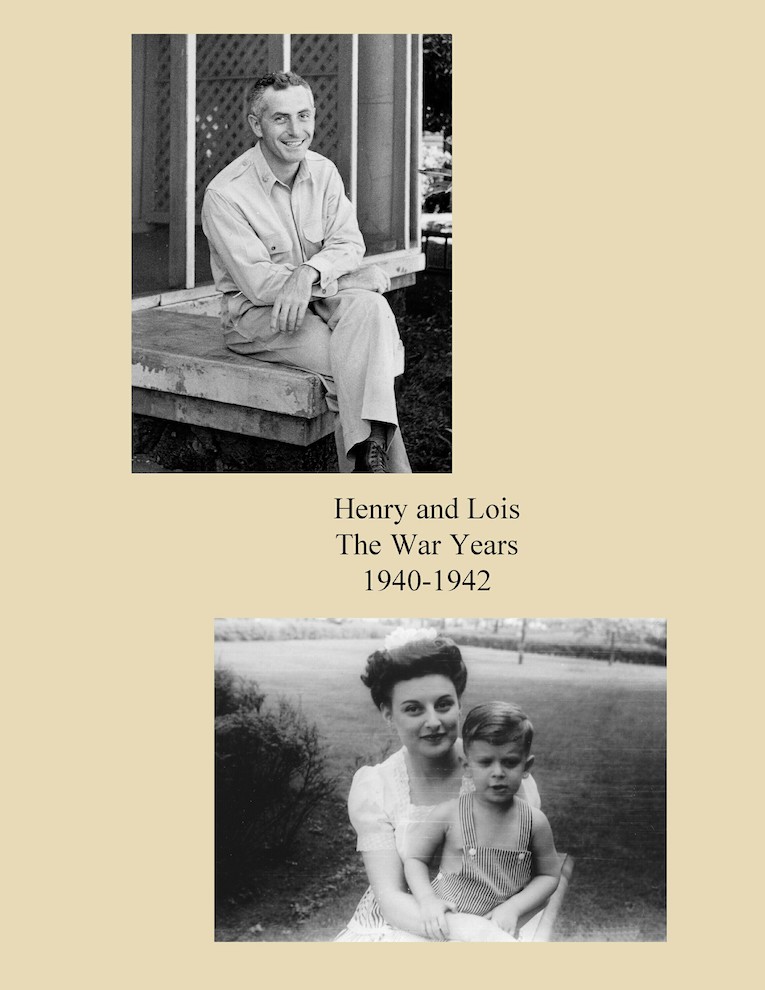 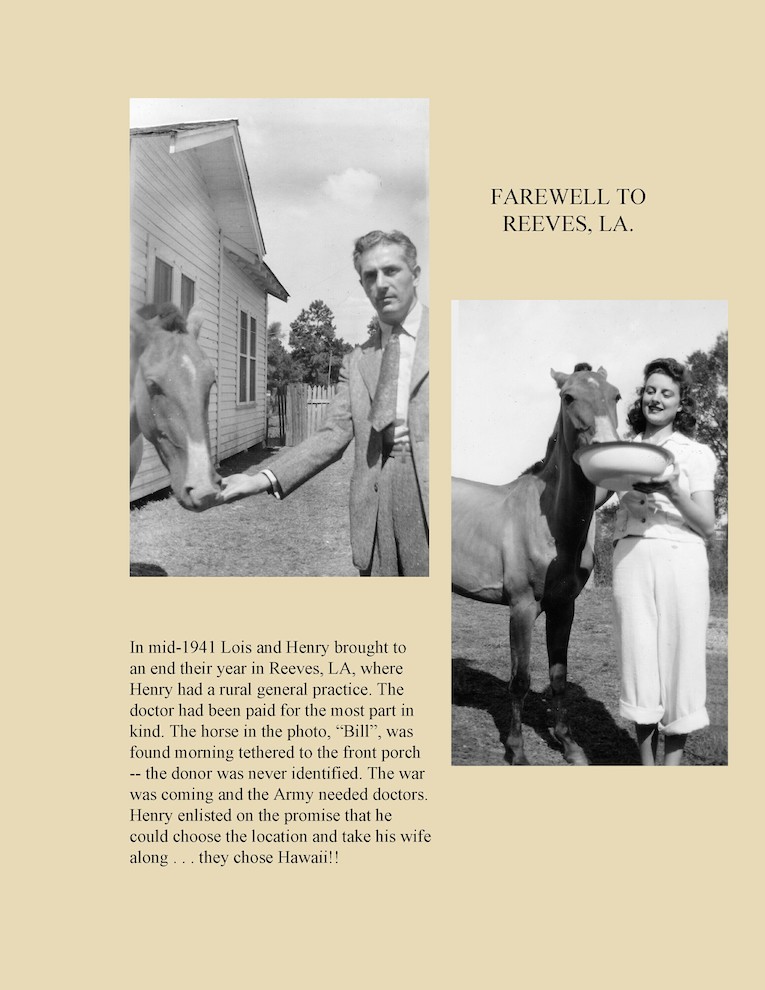 Thank you to everyone who posts a review of VueScan on Facebook! When you’re a small company it can be difficult to become well known and trusted and these reviews help us a lot.

Massive thanks to Andy Cook who posted this review for us – this is an example of Ed Hamrick working on ‘fixing problems!’

Kudos to Ed and Hamrick Software!!

I have an old HP ScanJet 3670 (prehistoric by modern tech standards–I think it’s 18 years old). I found VueScan in the first place because I needed MacOS drivers for that old gal, and HP had abandoned that model ages ago. VueScan to the rescue.

For some reason, an update put the old gal on her heels (it quit scanning correctly). I reported that issue and Ed went to work on it right away. It is challenging to diagnose/troubleshoot/fix a problem when you don’t have the scanner on your own “bench” right in front of you. As a developer myself, I can affirm what a challenge that situation presents.

But, Ed wouldn’t back down. Fortunately, I have another, newer scanner (that VueScan is still the best solution for, by the way). I even gave Ed permission to abandon my old 3670. But, Ed insisted it was still worth his while in fixing it.

Ed was like a dog with a bone, and wouldn’t quit. And, today he delivered an update that restores that old warhorse to her full glory. She scans like she just came out of the box. I love Hamrick Software, and VueScan!!

And we love this from Laraine in New Zealand

Personally, I would vote for VueScan as the No. 1 piece of software of the century (so far). Look at all the perfectly good scanners you have saved from being sent to the dump. My husband uses a Mac from 2008 and we’re very unhappy that Apple no longer gives security updates for El Capitan, which is the latest software he can use. It seems no time since El Capitan was released.   Kind regards