Can't find a driver for your Fujitsu ScanSnap S1500 ?

We reverse engineered the Fujitsu ScanSnap S1500 driver and included it in VueScan so you can keep using your old scanner. 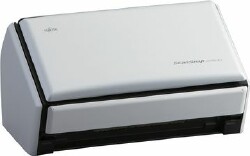 If you're using Windows and you've installed a Fujitsu driver, VueScan's built-in drivers won't conflict with this. If you haven't installed a Windows driver for this scanner, VueScan will automatically install a driver.

On Linux, you need to set up libusb device protections.

VueScan uses in-scanner JPEG compression with this scanner to scan faster. You can turn this off by setting 'Input | Fine mode'.

On Windows, make sure the ScanSnap Manager isn't running before running VueScan.

Fujitsu sold this scanner in some countries as the ScanSnap S1500M.